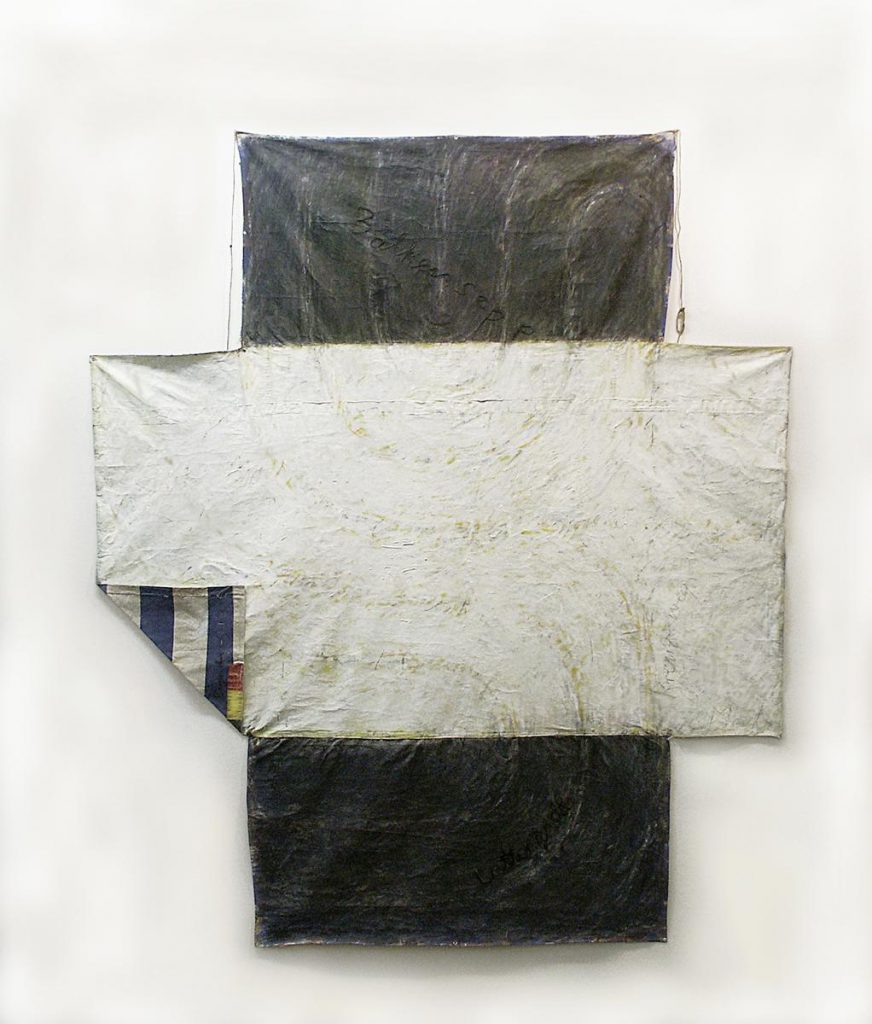 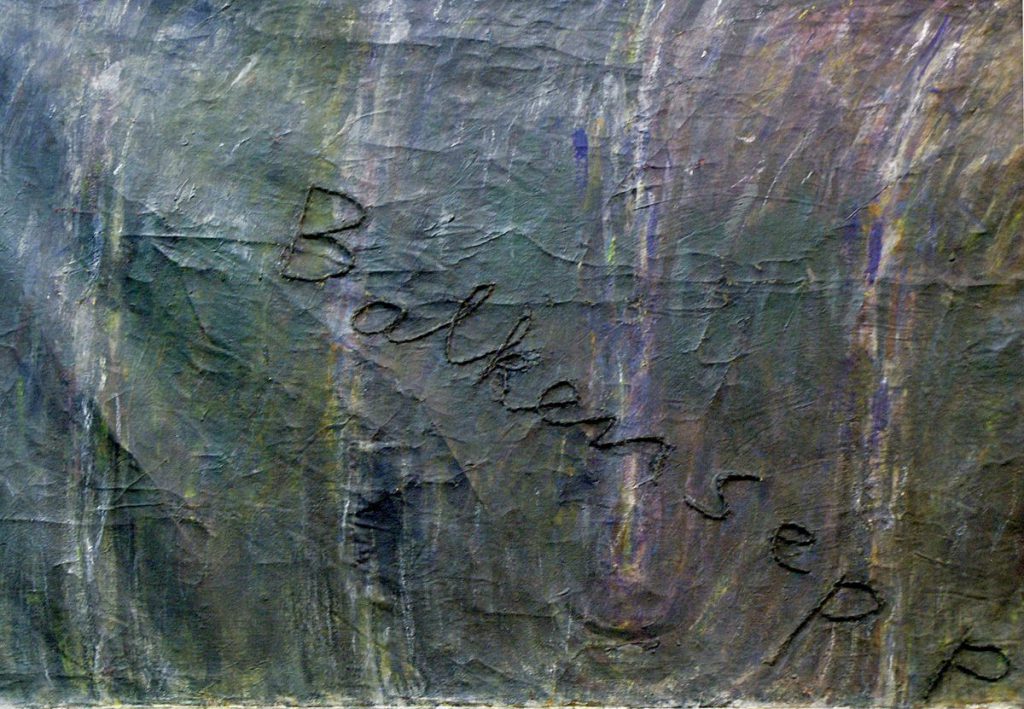 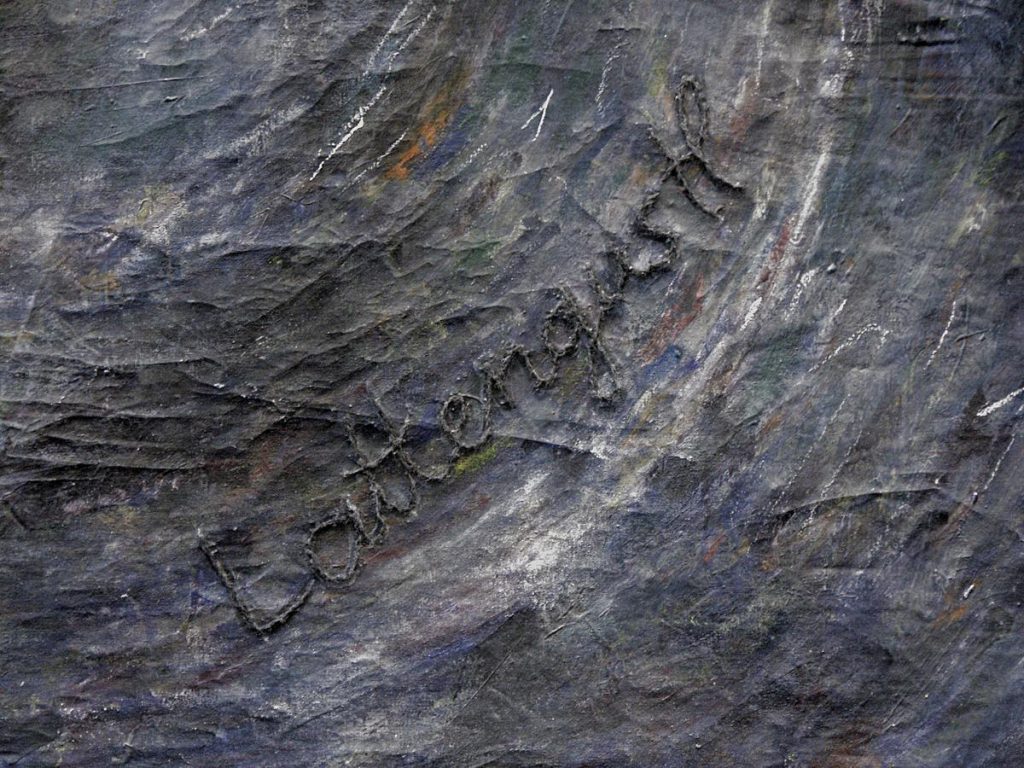 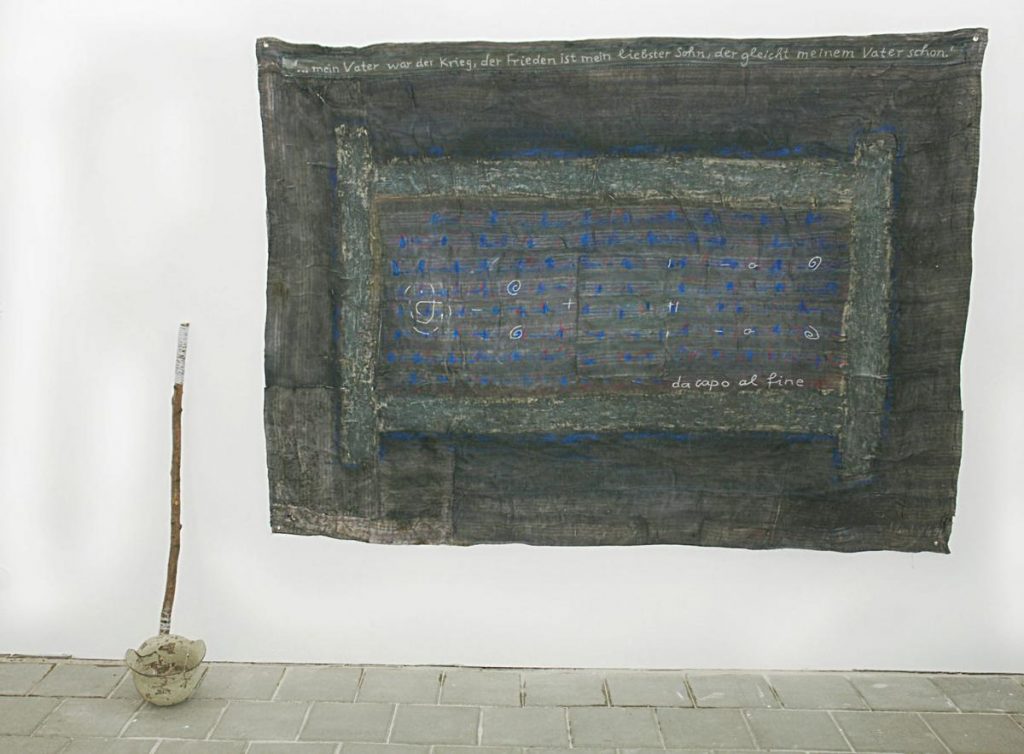 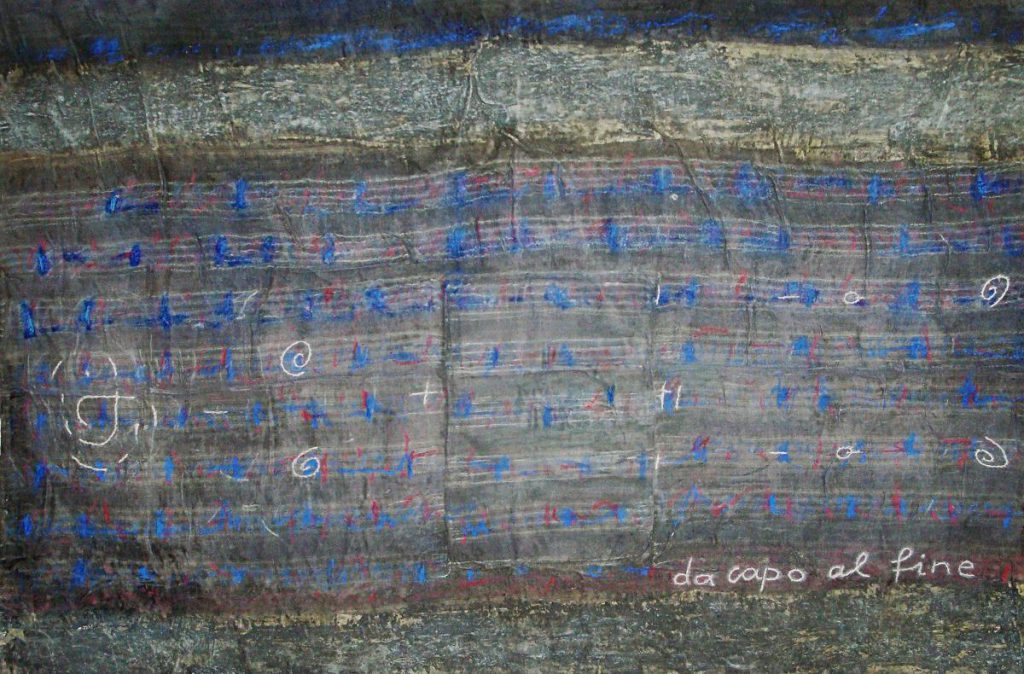 This piece of art consists of an old sheet and a helmet. The sheet comes from an Italian family of agricultural labourers. I found it in the late eighties of the last century after the death of family members in the empty little house in Tuscany, where they had lived, the man as a „Mezzadro“, which means that the family was dependent on the „Padrone“.

Behind the house I found the helmet of a German soldier from the Second World War. The helmet was bound at this time to a wooden stick with steel-wire in order to empty the latrine.

In this part of Tuscany the German soldiers treated the civilian population very brutally during their retreat in the Second World War.

The sheet, which I found, seemed to tell a story about the pain and the poverty of everyday life and also about the violence of social and political conditions.

In 1991 (the first American Iraq-Invasion took place) I started to work on the sheet and embroidered the words „da capo al fine“. The lines on the fabric had reminded me of the lines of a musical score. „Da capo al fine“, which means repetition in music, relates here to the successive episodes of life and death, of suppression and violence, of war and peace.

Later, in 2003, I embroidered some traces of a lying figure into it.

I also covered the helmet with fango-mud, found in a hot water spring not far from the place of the house.

2009 I added, as embroidered writing, the lines of a poem by Erich Fried:  „… my father was the war, peace is my beloved son, he already resembles my father. “

I am passionately against war, even when I can’t say, I am a pacifist, that’s too big a word for me, because I am not free from war inside myself, though I work on it. (I never believed in a justified war in contrast to a wrong war. War always is wrong in so far as it brings suffering.)

Being born in the year of 1942 in Germany, having lived through bombing and flight from the Russians as a very little child, though being told afterwards that we had a protected and good childhood, I guess what it means for children born in Iraq or one of the other places, where war and violence happens. Children in war always are the weakest victims and there lies the potential danger for the future, the hatred and despair, but of course also the hope that children as survivors develop the urgent wish of: „never again“.

I was one of the children born during the Second World War in a so-called normal German family, whose father was a soldier and who was not persecuted by the Nazis.

That means that I was not a victim’s child, but an offender’s child.

Nevertheless all children could become victims. This and the horrors of the Nazi-Regime, which were hidden from us for quite a time, became a Trauma for many of my generation. For me it is one of the main themes of my life and it also appears in many of my art-works. This wanting to know, to find out the truth, became an absolute necessity after this post-war-time of silence on the part of the adults about the atrocities of the past.

I didn’t want to be silent anymore and started first to collect and to discover all sorts of things, for example old hidden photos and documents.

As an artist later I discovered names of big firms, which worked for Hitler, like Thyssen and Krupp, imprinted together with the dates of 1934 or 1937 on railway-sleepers of the so-called Ringbahn (circular railway) in Nürnberg, which had served Hitler for a time to move the masses quicker to the place of the Reichsparteitage. I took Photos of these and did some rubbings (frottages) on paper, both of which I integrated in one of my installations.

This was exhibited in Januar1991 and I also showed a collage of the rubbed firm-names to which I had added the name of Daimler as one of the great deliverer of weapons for Iraq and elsewhere. I had opposition to this and some accused me of showing a kind of continuity since the war-politics in the so-called „Third Reich“. In their eyes this was not correct. During this exhibition the first Iraq-war started.

In another work , I was invited for an exhibition 1995 under the title: „50 years of peace?“, I showed a big Photo-collage with some dates from 1945 to 1995 and many names of firms who had delivered weapons to countries in warfare during this period and still do.

Other works of mine had to do probably with my experience as a four year old child in an American war-prisoners-camp, run by Poles, after the war. I was secretly left there for about two weeks with my father, who was imprisoned. My mother could visit him from time to time. I was happy to be with my father, but certainly all these war-sick men must have impressed me.

Perhaps much later my works called „Alle meine Helden“ („All my Heros“) relate somehow to this experience.

The work exhibited here in London, I must say, I didn’t plan it, as it is now. I first found a trace of life in an abandoned place in Italy, where peasants were gone or had died and left some traces. And of course the war had left its trace there too in form of a helmet of a German soldier.

I often work as an artist with remembrance or recollection and with places, where things happened but where signs are no longer evident.

I feel, I sometimes work against the disappearance of what happened.

We can’t change what happened and mostly not, what is happening just now* but we can tell it and try to find some accomplices, just like here with the MAW.

* Just now more than a thousand millions people are starving, more than 40 wars and civil wars are going on. Germany is worldwide the third biggest exporter of weapons. Daimler is together with EADS (H & K) the biggest producer and exporter of Big-Weapon-Systems in Germany. Every 14 minutes a human being is dying through these weapons.